If it was easy, everybody would be doing it. Trust me, this has not been easy. Some runs are easier than others. Some days you go out and you feel you never need to stop. Some days you feel like you can never start but once you get going things go smoothly. Other days you start and you wish you had never got out the door. But if you persevere I believe you can achieve.

Monday night was one of the tough ones. I had had a couple of runs over the weekend which had gone well – I will come back to them later – but had not managed to do my planned long run. I have been following a training plan for the Stirling Marathon. Not religiously, but sticking to it pretty well and, in fact, I have routinely run further and for longer than the plan suggests. As it is my first marathon, I want to prepare as much as I can. I had hoped to do another twenty miles or so on Sunday but that could not happen for various reasons.

“I just was not feeling it”

It is so hard to explain why I had a run like that. I have no real idea. Maybe my training caught up with me after running for six days out of seven, plus a lot of travelling. Maybe. I think I am doing enough. I think I can do it. To be honest, it was thinking those kind of thoughts that kept me going on Monday night. I have also started fundraising, so as I ran I thought about the comments from friends who have posted donations, and their reasons for supporting me. And I thought about finishing. I think about that quite a lot.

“I stumbled on an uneven paving slab coming up the hill..”

I guess many people see running a marathon as a physical challenge. I think it is too. But as I have got further into my training and the marathon itself comes closer, I am more convinced than ever that the mental side of running is as important. Being strong in the mind will be as key as being strong in the body come race day. The other thing about Monday night was that I stumbled on an uneven paving slab coming up the hill towards the house and tweaked my achilles. That was to cause me other issues.

After what happened on Monday night, I decided on a rest day on Tuesday, but on Wednesday I went out for a five-mile run. This one was fine as I took it very easy, but that achilles was aching a bit when I finished. In order to prevent further injury, I decided to have more rest days for the rest of the week. I feel odd when resting, but I realise now that I need to be careful to avoid injury. Better two days rest than to risk things and be out of action for two weeks.

“…directly into the teeth of the Easterly gale howling in.”

I mentioned earlier about running on Saturday and Sunday. Saturday was a horror show of a day. Freezing cold, snow showers blowing through and a biting wind from the East. As I was visiting Falkirk over the weekend, I decided to run down the Forth and Clyde Canal towpath to the spectacular Kelpies. This was a great plan, except for one thing. Running down the towpath was directly into the teeth of the Easterly gale howling in. It was tough going, but at least, I thought, it will be wind behind coming back. This brings me to a conundrum. Why is it that when running into the wind it feels like hurricane force, but when you run in the opposite direction, it suddenly turns into a calm, gentle whisp of a breeze? Anyway, tough going into the wind, a bit easier the other way and a solid four miles in a good time for me. Hard going in parts but a positive experience and the bonus of some great photos of an iconic Scottish landmark.

Returning to Aberdeen on Sunday, I decided to face one of my fears. In all of the runs I have done and all of the routes I have taken in my months of training, I have specifically avoided one route which takes me up the largest hill towards my house. I have previously mentioned how hilly it is around where I stay, but this steep incline had always been one which I felt would be a hill too far. It looked too tough for me – too long, too steep. But on Sunday I worked out a route with a finish up the big hill. And I went. And I did it. I made it up the hill, no stopping, just focussing. Concentrating on my form. Thinking, “head up, knees up.” Did I mention that this is a mental game?

The plan for Sunday is another long run, getting back up towards twenty miles once more, before another business trip to Boston on Monday. I only have two more long runs planned before I begin to taper things off and reduce the mileage in preparation for the race itself. Let’s hope this Sunday is a good one.

3 thoughts on “Harder Thank You Think” 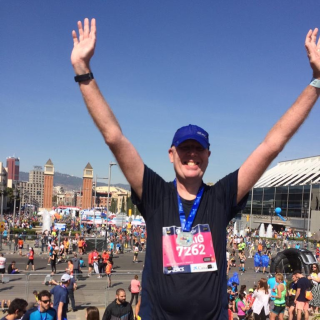